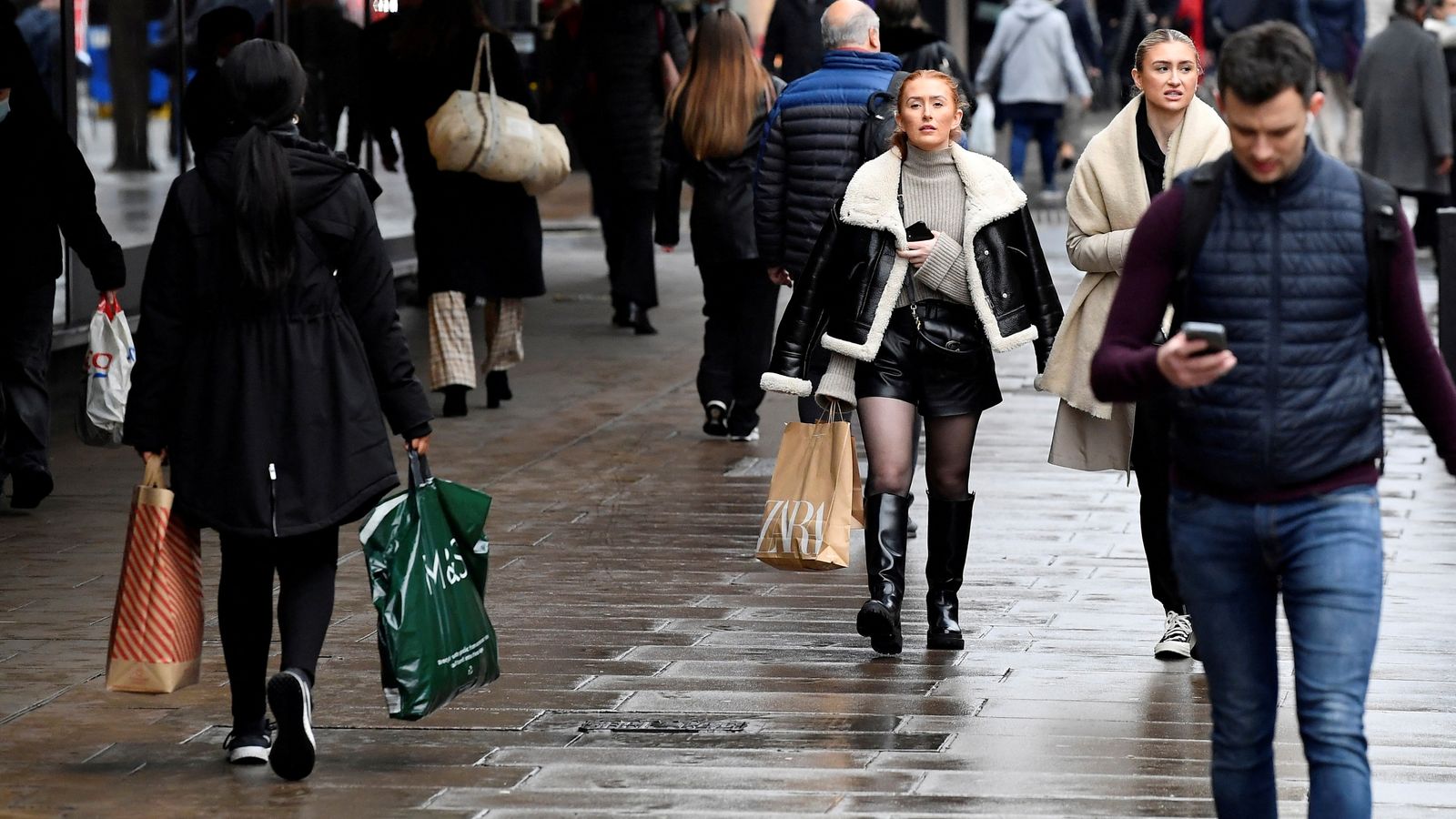 The UK economy contracted by 0.2% in the third quarter, early official figures show, marking the first step towards recession.

The Office for National Statistics (ONS) reported a dip in output for September, leaving gross domestic product (GDP) in negative territory for the July-September period as a whole.

The quarterly GDP is the value of all goods and services produced during a three-month period and is a measure of the health of the economy.

The official definition of a recession is two consecutive quarters of negative growth.

It would be achieved should the economy also contract in the current fourth quarter to the year’s end.

The quarterly contraction was not as bad as had been expected.

Economists polled by Reuters had expected contraction of 0.5% following the upwardly revised 0.2% growth seen in the second quarter of this year.

The outlook was seen as so dire by the Bank of England last week that it declared the UK was already in recession – outlining a scenario where the economy could contract for eight successive quarters from the third quarter of 2022.

That would make the downturn the most protracted since records began though the depth of the plunge would be moderate in comparison to that seen after the 2008 financial crisis.

There was a sharp fall in GDP in September which the ONS said was affected by the bank holiday for the funeral of Her Majesty Queen Elizabeth II. Some businesses closing or operating differently on this day resulted in a contraction of 0.6% for the month.

Even excluding the extra bank holiday in September the contraction the Confederation of British Industry (CBI) said ” it’s clear that underlying activity has weakened”.

The downturn is being driven by the effects of the cost of living crisis which has led to a reduced consumer spending which has resulted in an economy 0.4% smaller than the COVID-19 pandemic.

Costs started rising globally because demand was outstripping supply at the end of COVID lockdowns.

Then an economic bombshell was to exacerbate the inflation problem as Russia invaded Ukraine in February – forcing up costs of many core commodities such as oil, gas, wheat and other foods.

The consequences, which include the impact of Western sanctions on Moscow, forced up prices which were then passed down supply chains to the consumer.

Rising interest rates to tackle inflation, not only in the UK but across large parts of the world, have forced up borrowing costs to squeeze spending power even more.

UK borrowers have endured additional pain after the Truss government’s mini-budget sparked a crisis of confidence in the UK public finances on financial markets, the damage from which is still being felt by mortgage customers in particular.

A weaker pound has also added to inflation because it makes the cost of imports more expensive.

Ed Conway, our economics and data editor, has given his immediate reaction to the news GDP has fallen 0.2% in the third quarter of 2022.

He says that although the fact the economy is shrinking is “obviously not good news” – the fall is “less bad than many economists had predicted”.

“The fact that the GDP is shrinking is obviously not good news, however 0.2% is less bad than many economists had predicted – they thought it was going to go down by about 0.5%,” Conway said.

“This is a little bit better than expected, but even so, it still suggests we are in the beginning potentially of a period of contraction.

“People have been talking a lot about recession recently. Well, it is a slightly arbitrary term, but essentially what it means is when you’ve got two successive quarters of the economy shrinking.

“That technically constitutes a recession. The majority of economists think that next quarter we’re going to be shrinking, and potentially the quarter after that.

“This may be the beginning of a period of the economy shrinking.

“But as I say, it is a bit better than we expected – so there is a little glimmer of hope there.”

He concluded that although the fall is “not good news” – it is “certainly not as dire as some had believed”.

Commenting on the economic contraction, Chancellor of the Exchequer, Jeremy Hunt blamed Russia’s invasion of Ukraine for driving up inflation.

“We are not immune from the global challenge of high inflation and slow growth largely driven by Putin’s illegal war in Ukraine and his weaponisation of gas supplies,” he said.

“I am under no illusion that there is a tough road ahead – one which will require extremely difficult decisions to restore confidence and economic stability. But to achieve long-term, sustainable growth, we need to grip inflation, balance the books and get debt falling. There is no other way.”

“While the world economy faces extreme turbulence, the fundamental resilience of the British economy is cause for optimism in the long run.”

The chancellor faces an uphill battle in his forthcoming autumn economic statement on 17 November.

“A contracting economy makes the autumn statement much more challenging, because it means less tax revenue for the government, while aggressive spending cuts and tax rises would drive a longer and more damaging downturn,” Suren Thiru, economics director for ICAEW (Institute of Chartered Accountants in England and Wales), said.

Mr Hunt has been warned against turning to austerity.

“A turn to a more austere fiscal policy expected from next week’s autumn statement could contribute to prolonging any downturn”, said Yael Selfin, chief economist at KPMG UK.

“Interest rate rises and the prospect of the Bank of England raising them even further could exacerbate the stalemate in the UK housing market, causing more pronounced cutbacks in spending.”

‘Couldn’t be more excited’: Elton John to headline Glastonbury in last UK gig of final tour
Government running out of prison places and has to ask police for 400 cells
Wonderboy vs. Holland: How to watch, plus analysis and betting advice
Woman abducted as a baby reunited with family 51 years later
Tech layoffs send visa holders on frantic search for employment to avoid deportation