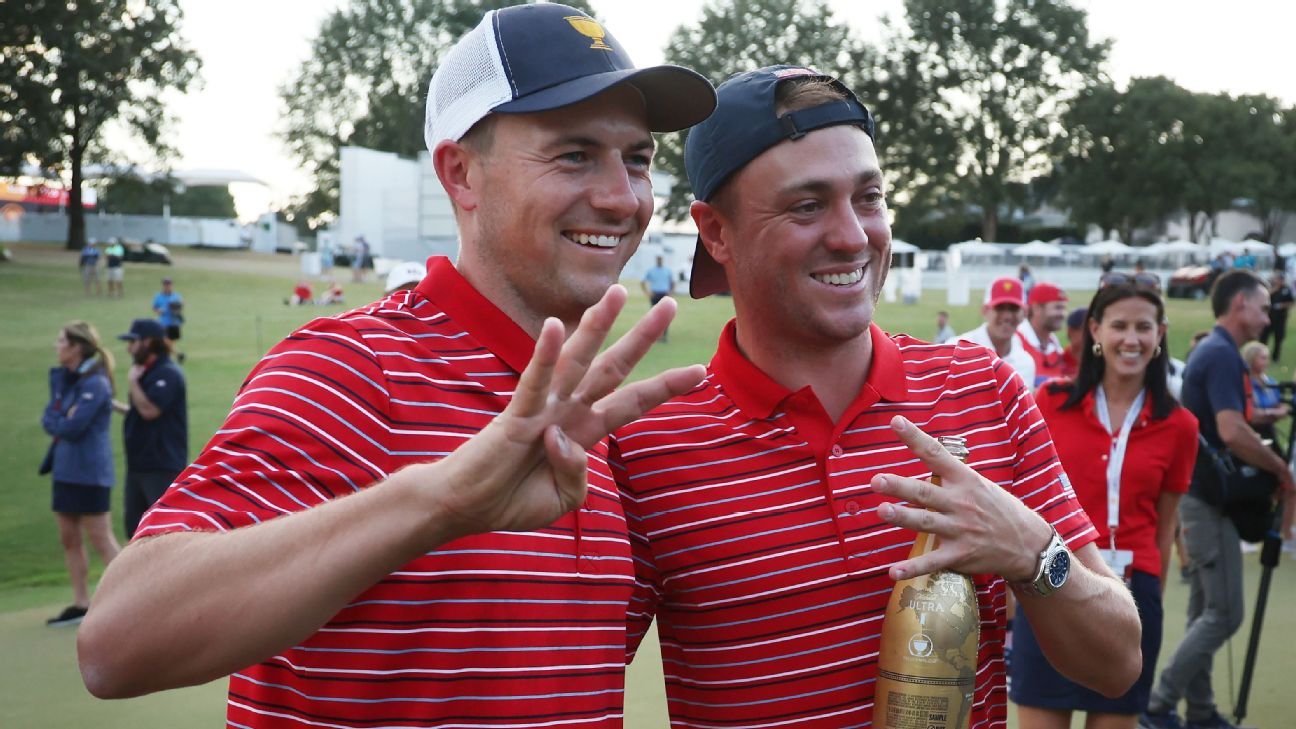 The U.S. team captured the Presidents Cup again, taking down the International team 17½ to 12½ at Quail Hollow Club in Charlotte, North Carolina, on Sunday. It was the Americans’ ninth straight victory and 12th in 14 editions of the event.

Over four days, Jordan Spieth and Justin Thomas emerged as the face of American team golf, now that Dustin Johnson and Patrick Reed are competing on the LIV Golf circuit. South Korea’s Tom Kim became a household name, and the International team showed a lot of heart in competing better than expected.

Everyone needs someone to love them like JT loves Jordan, and vice versa.

There’s no question the International team has inherent hurdles the Americans don’t have to deal with, starting with language barriers, cultural differences and unfamiliarity with each other.

International team captain Trevor Immelman wasn’t exaggerating (that much) when he called this U.S. team the greatest ever assembled. The 12-man U.S. squad included five of the top 10 players in the Official World Golf Ranking. Each of them was in the top 25.

And when U.S. team captain Davis Love III can roll out the tandems of Thomas-Spieth and Xander Schauffele–Patrick Cantlay each session, it’s like having Max Scherzer and Justin Verlander in a five-game series.

Spieth and Thomas, who have known each other since they were kids, went 4-0 in foursomes and four-ball matches. Cantlay and Schauffele, who are friends, both hail from California and won the PGA Tour team event in New Orleans this past season, went 2-1. The players went a combined 3-1 in singles.

When it looked like the Presidents Cup might turn into another rout on Friday, one of the most exciting things to watch was Spieth and Thomas feeding off each other, fist bumping, chest bumping and screaming at each other along the way.

And that’s what makes the core of U.S. stars so dangerous in team events going forward. LIV Golf might have actually done the Americans a favor by luring away Reed, who was popularly known as “Captain America” by fans but wasn’t so popular in the team locker room. Reed infamously complained of captain Jim Furyk’s “buddy system” in choosing pairings at the 2018 Ryder Cup in Paris, which the Americans lost, 17½ to 10½.

The 12 players who competed for the U.S. this week genuinely seemed to like each other. There wasn’t an elephant in the room because of Bryson DeChambeau’s ongoing beef with Brooks Koepka, or because Reed was unhappy about having to play with Tiger Woods instead of Spieth.

A few times this past week, Presidents Cup rookie Max Homa, a five-time winner on the PGA Tour, mentioned that he wasn’t particularly close to anyone else on the U.S. team. But when Homa said it again during a news conference after Sunday’s victory, Sam Burns quipped, “Love you, Max.”

“Sam’s a perfect example of somebody I’ve always gotten along with great and somebody I was looking forward to getting to spend real time with,” Homa said.

Tom Kim is a superstar

The South Korean phenom’s name is Joohyung Kim, but he prefers Tom, a childhood nickname given to him because of his fondness for Thomas the Tank Engine. These days the 20-year-old has as much steam building as his namesake.

After winning the Wyndham Championship for his first PGA Tour victory a month ago, Kim’s pro debut in a team event was a coming-out party. He was the youngest player on either team and the third youngest to ever compete in the Presidents Cup, behind only Ryo Ishikawa and Jordan Spieth.

Kim went 2-3 in matches this week, and he was the pulse of the International Team and a crowd favorite at Quail Hollow Club because of his exuberant celebrations. On Sunday, Kim showed up at the first tee wearing sunglasses and egging the crowd to cheer. He was a rock star.

After losing his first two matches, Kim and his partners at least gave the International Team a glimmer of hope on Saturday.

In the Saturday morning foursomes, Kim paired with South Korea’s K.H. Lee to take down world No. 1 Scottie Scheffler and Sam Burns. That afternoon, Kim and Si Woo Kim stunned the seemingly unbeatable tandem of Patrick Cantlay and Xander Schauffele in four-ball competition. Kim had an eagle on the par-4 11th hole and then made a 10-footer for birdie on the 18th to defeat Cantlay and Schauffele.

“I think the sky’s the limit,” said Kim’s caddie, Joe Skovron, who was on Rickie Fowler’s bag until recently. “When you’re 20 years old and you’ve already won as much as he has around the world and to respond in this environment like he did, you know, and he seems to have a work ethic to go with it and a plan. “

It’s difficult to imagine that not long ago Homa didn’t have much confidence in his game. He was one of the funniest pro golfers on Twitter (and still is), but he didn’t have much to show for his work in terms of results. At the end of the 2020 season, he was 70th in the FedEx Cup standings.

Homa, 31, delivered a signature moment of the Presidents Cup on Friday. Playing with Billy Horschel, their match against Canada’s Taylor Pendrith and Corey Conners was tied after 16 holes. Homa made a 12-foot birdie putt on the 17th hole to go 1 up. Then, after Pendrith made a clutch 15-footer for birdie on the 18th, Homa made another 12-footer to win the match.

After defeating Tom Kim on Sunday, Homa improved to 4-0 in his Presidents Cup debut. He is only the fourth Presidents Cup rookie to go 4-0-0 or better in his debut.

“I’ve said it a million times, but last year, at Kiawah [Island], doing the fitting for the Ryder Cup, knowing I didn’t really have much of a chance anymore was tough,” Homa said. “Looking at yourself in the mirror and all the USA gear, it was hard. But I’ve got a thing seared into my brain, and my main focus this season was to make this team, to play with these guys.

“A lot went into that. And to be here was one thing, and then to come out and play some great golf was another. And this week has been beyond special, validating, meaningful, all of the above. It meant a lot.”

The PGA Tour needs more superstars, especially after so many big names like Dustin Johnson, DeChambeau, Cameron Smith and others defected to LIV Golf. The tour should embrace Homa’s personality more than ever before.

The International team is getting closer

Despite losing for the ninth consecutive time and the 12th time in 14 Presidents Cups, International team captain Trevor Immelman believes his squad is getting closer to winning. The International team was a massive underdog this week, especially after Smith, the No. 3 player in the world, Marc Leishman, Abraham Ancer, Louis Oosthuizen and Joaquin Niemann left for LIV Golf.

While Thomas and Spieth and Burns and Scheffler have been longtime friends, and many of the U.S. players live near each other in Florida and Texas, the International team’s players are scattered around the globe, making their dynamic different.

Immelman insists his team has made great progress in addressing the hurdles it faces. He credits Ernie Els with starting the transformation before the previous Presidents Cup in Australia in 2019. Els introduced the International team’s shield, which is on the players’ uniforms, golf bags and hats. They were selling merchandise with the shield at Quail Hollow this week.

While others have suggested that dramatic changes are needed to the Presidents Cup, from bringing in women golfers to allowing LIV Golf players to compete, Immelman thinks his team will continue to improve.

“We have a system that we like and a plan and a strategy, and it feels like to me, you know, this was an important week for us just to just lay a couple more bricks in this house that we’re trying to build,” Immelman said. “We’re here for the long run in this event. We’re going to win this event. So we’ll keep building. We’ll keep fighting. At some point, we’re going to win.”

Love also doesn’t believe the format should be changed.

“There wasn’t any talk from either of our teams, Trevor’s or ours, about changing the format,” Love said. “We’re having a lot of fun, and we love it, and our team looks forward to next year in Italy and then the next year in Canada.”

“Two of the last three were extremely competitive,” Monahan told ESPN this week. “I think what Ernie and Trevor have started here in terms of building a team and building a culture, having been kind of inside that and understand that and seeing that evolve and being close to it, they’re building something that is sustainable and really special and aspirational. Every player on that International squad wants to be on that team, desperately.”

If the Americans’ 19-9 victory over Europe in the 2021 Ryder Cup at Whistling Straits wasn’t enough evidence, the U.S. team’s dominance at Quail Hollow was further proof of just how good and deep this roster is.

The next big team event is the 2023 Ryder Cup, which is scheduled for Sept. 29-Oct. 1 at Marco Simone Golf Club outside Rome, Italy.

As long as they’re healthy, as many as 10 players might be back on that U.S. roster. And don’t forget that Will Zalatoris, the No. 8 player in the world, would have been on the Presidents Cup team if not for a back injury. It seems unlikely that Kevin Kisner and perhaps Billy Horschel will be back, although they could play themselves back into contention for a roster spot.

The European team will be led by Northern Ireland’s Rory McIlroy, the No. 2 player in the world, and Spain’s Jon Rahm, who is No. 6. After being walloped in Wisconsin, the European team probably needed a face lift and transfusion of energy. It’ll get one after Ryder Cup veterans Paul Casey, Ian Poulter, Lee Westwood and Sergio Garcia joined LIV Golf.

The challenge for the American team will be winning a Ryder Cup on foreign soil, which it hasn’t done since 1993.

“I think that winning at home is special in its own way, and there’s nothing that beats it,” Spieth said. “But going over there on the road and winning would be incredibly special next year, and I really hope I’m a part of the team.

“And the kind of team rooms that I’ve mentioned that we’ve had the last few years, it’s going to stay that way, and I’m very confident in our ability to go over there and win. You could tell me the last time it happened over there, but nobody here has any scar tissue. Everybody on this panel would very much embrace what that looks like next year.”

Meet the rising stars shortlisted for Brit Award previously won by Adele, Sam Smith and Celeste
Quick Charge Podcast: November 28, 2022
The US just made a big decision about Chinese solar – here’s what it means
Crowds in major Chinese city clash with riot police in hazmat suits
Germany knocked out of World Cup in group stages after thrilling night in Qatar