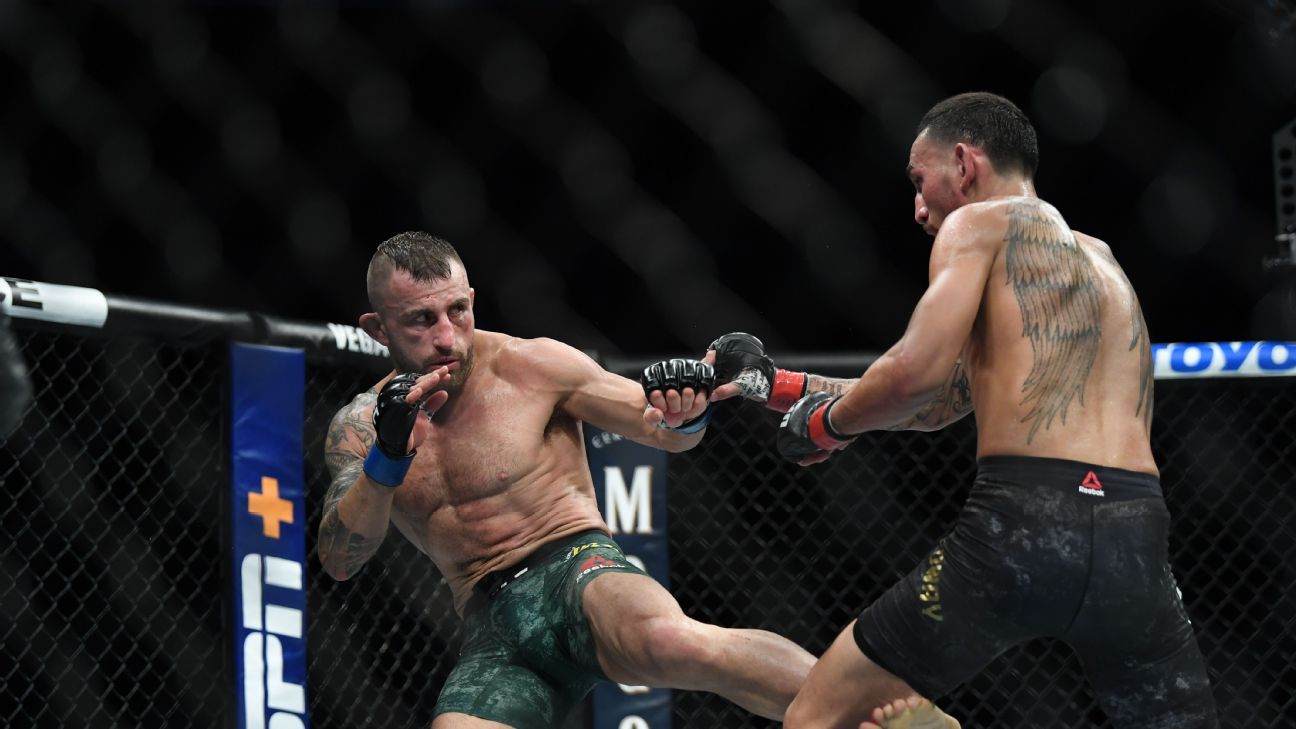 A pay-per-view event headlined by two championship bouts used to be a special occasion. Now it’s practically a business model. UFC 276, which takes place Saturday in Las Vegas (10 p.m. on ESPN+ PPV), will be the company’s fourth straight PPV with a pair of fights with belts on the line.

This event follows another recently established tradition, as both champs are coached by Eugene Bareman of City Kickboxing in Auckland, New Zealand. In November 2021, it was coach Trevor Wittman in that position — and then some. At UFC 268, Wittman was head coach and chief corner for welterweight champ Kamaru Usman in the main event, then-strawweight champ Rose Namajunas in the co-main and Justin Gaethje in a lightweight No. 1 contender bout that opened the main card.

This weekend’s event at T-Mobile Arena has an appeal that extends well beyond the title bouts. There are rising stars and other fighters with the potential to catch that wave. There are legends of the sport looking to wring every drop of magic out of a career to remember. There are solid professionals seeking to disrupt any star-making plans that overlook them. It should be a stellar night of fisticuffs.

Here is one man’s ranking of the top five bouts:

We’ve seen this movie before. We’ve even seen the sequel. Both had the same ending. So what drama could possibly remain? It’s there, all right, wrapped up in the breathtaking moments that always seem to happen when these two, the elite of the elite at featherweight, get together.

Volkanovski (24-1) won the title from Holloway with a clear-cut decision victory in December 2019, but he had to eke out a split-decision win in the rematch seven months later. He has won 21 fights in a row, with his last defeat coming nine years ago. Holloway also is on a run of success extending back to 2013. Aside from the losses to Volkanovski, he has not dropped a fight at 145 pounds since he was a 21-year-old on the wrong end of a decision against Conor McGregor.

Volkanovski and Holloway have lapped the rest of the field in the division, and that preeminence is never more evident than when they share the cage. So if this meeting lives up to the last two — and here’s a not-so-bold prediction: it will — and if they’re not tired of each other, we’ll gladly watch these guys tangle again and again.

Adesanya might be the most entertaining champion in the UFC, and this is the kind of bout that will shine a light on what makes “The Last Stylebender” a special performer. Cannonier will bring the fight to the champ and get right in his face with feisty pressure. And what more could Adesanya ask for?

Cannonier is a 3-to-1 underdog, so the odds are stacked against him. But he has made it to this middleweight title challenge on the strength of a solid run in the division. Since making his 185-pound debut in 2018, he has won five of six bouts, with the lone loss coming against former champion Robert Whittaker. Slimming down from light heavyweight has benefited Cannonier in a big way.

But the challenger, sturdy as he is, will have his hands full with Adesanya, just as the champ has been a handful for every middleweight he has faced. And yet there’s a higher expectation of Adesanya. Maybe it’s because three of his four title defenses have gone the distance. Will this be the night he pulls off the spectacular finish we’ve been waiting for?

From a pound-for-pound top-10 list to a weighted listing of an evening’s fights, rankings are, at their essence, nothing more definitive than a list of opinions. There is no right or wrong. I point this out right here because I suspect that a lot of fans would not slot this fight ahead of the one I’ve ranked right below it. But I’ll take accomplishments over bluster any day. And Miller, despite not ever having colored his hair rainbow colors, has been there, done that. This will be his 40th UFC fight, the most of anyone. He is tied with two others for the UFC wins record (23).

One of those tied with Miller is Saturday’s opponent, Donald Cerrone. And this will be the 38th UFC fight for “Cowboy.” Cerrone is 39 years old, Miller 38. So the matchup would seem to make sense for both men. Honestly, there are not many such fights out there for Cerrone, who is winless in his last six and has been a shadow of his old self. That old Cerrone knocked Miller into the shadow world back in 2014, but eight years later, Miller is the fighter in a better place, with knockout wins in his past two appearances.

“Cowboy” is a late-replacement opponent, and he adds luster to a Miller fight that might otherwise have been lost under the radar. But Miller, a career lightweight, will be competing at welterweight because of Cerrone’s short notice. That’s a small price to pay (I know, easy for me to say) to put this fight under some wattage of spotlight, where it belongs.

While even the biggest O’Malley fan would acknowledge that he has yet to live up to his fame, even the biggest critic — “Suga Sean” has plenty of both — would have to concede that this is a defining test of O’Malley’s slow roll toward bantamweight relevancy. O’Malley’s stylish brashness has drawn attention for years, but style points add up only when accompanying — and even factoring in — positive results against an ascending level of competition. McGregor’s gift of gab wouldn’t have vaulted him to the top of the game if he couldn’t back up the big talk with big performances.

Munhoz has fallen on hard times, with four losses in his past five fights. But the losses came against Aljamain Sterling, Frankie Edgar, Jose Aldo and Dominick Cruz — all champions. If O’Malley can add himself to that list, he will have taken a step forward in beginning to live up to his hype.

It’s no coincidence that Pereira is fighting on the same card as Adesanya. I’m even a little surprised it has taken the UFC this long — Pereira’s third Octagon appearance — to book him in proximity to the champ. Adesanya and Pereira have an inhospitable history from their days as professional kickboxers, with Pereira owning two victories over Adesanya, one by knockout. Could this fight set up Chapter 3, but this time in four-ounce gloves?

Strickland will have something to say about that. (He has something to say about everything, right?) He will test the MMA-related additions to Pereira’s skill set. And while the focus will be on Pereira’s potential title shot — yup, after just three fights in the Ultimate Storytelling Championship — Strickland will not let the night pass without trying to make a case for a championship opportunity of his own. Who’ll make his case for a date with Izzy? And will it even be Izzy at the top of the mountain at the end of the night?

Households already owe £1.3bn to energy suppliers – even before winter bill hikes set in
‘A great friend and a great bass player’: Tributes for The Pogues’ bassist Darryl Hunt who has died aged 72
All London children aged one to nine to be offered polio vaccine after more virus found in sewers
Fourth alleged ‘Beatles’ Islamic State terror cell member arrested in UK
Felixstowe port strike to go ahead after talks break down