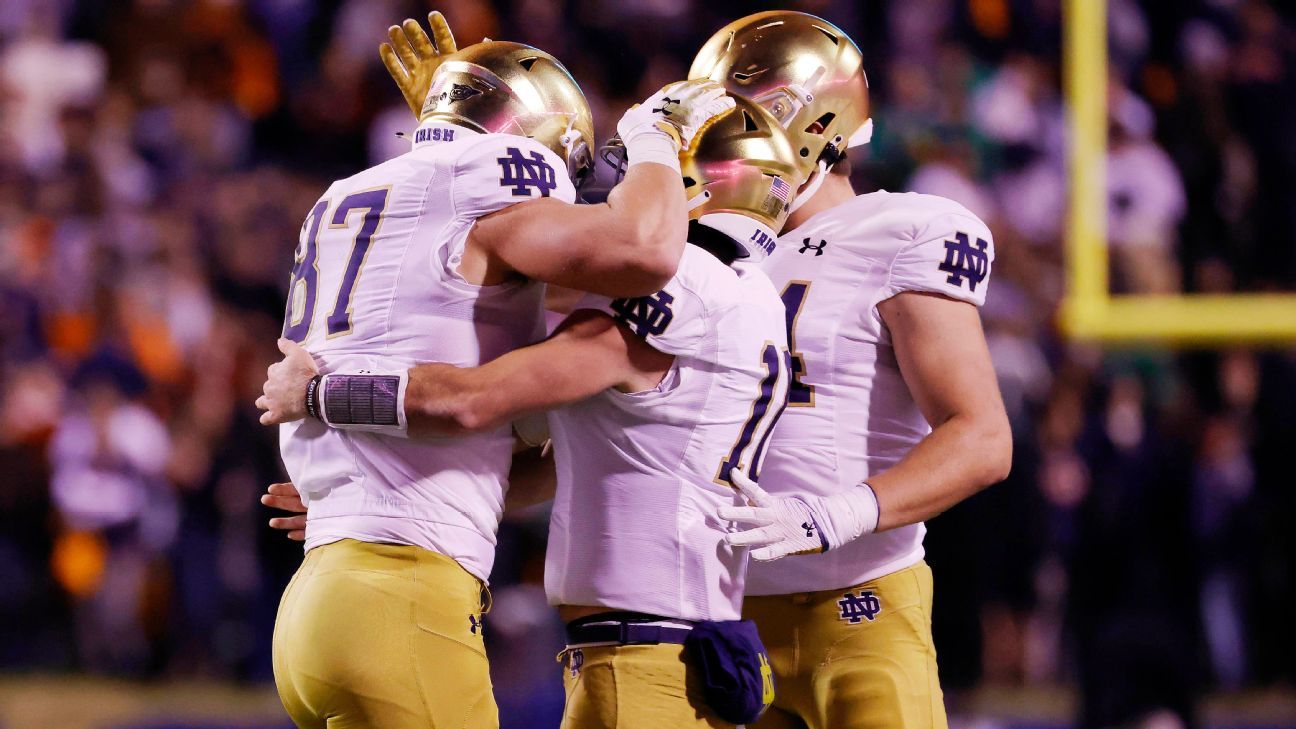 The top seven teams remained unchanged in the College Football Playoff’s third ranking of the season on Tuesday, the fifth time that has happened in CFP history. While there can still be a shake-up in the final three rankings, history tells us what we’re seeing might be very close to what we’ll get on Selection Day, Dec. 5.

So do No. 8 Notre Dame and No. 9 Oklahoma State really stand a chance?

Here’s a look at the biggest questions and most puzzling scenarios remaining for the committee heading into Week 12:

What happens if Oregon and Ohio State both finish with the same record?

Oregon’s Sept. 11 win at Ohio State has kept it ahead of the Buckeyes for three straight weeks, but that doesn’t mean the head-to-head result will last. Ohio State’s remaining strength of schedule, currently No. 7 in the country, isn’t significantly better than Oregon’s No. 12 slate. The Ducks’ toughest remaining game is at Utah on Saturday. If Ohio State finishes as a one-loss Big Ten champion, it will have defeated four straight ranked opponents, including in the league title game.

Oregon will have defeated three CFP Top 25 teams all season — including Ohio State. The committee has demonstrated, though, that eye test and metrics factored into its decision to rank Michigan ahead of Michigan State in spite of the Spartans winning that game. Ohio State’s offensive efficiency is No. 1 in the country, while Oregon is No. 17. Defensively, they are similar (Oregon is No. 30, Ohio State is No. 39).

When two teams are comparable, the committee uses the head-to-head result as one of several tiebreakers. The question is whether the committee would deem them comparable, or if Ohio State’s offense and its four straight wins against ranked opponents are enough to simply declare the Buckeyes better.

There’s also a possibility — albeit a more improbable one — that both Ohio State and Oregon finish as two-loss conference champions.

It’s not likely but conceivable that Oregon and Utah can clinch their respective divisions on Saturday while playing each other. If Oregon loses to Utah, and Oregon State loses to Arizona State, it would mean Oregon and Utah have locked in a rematch in the Pac-12 title game.

And the conference is guaranteed to have a champion with at least two losses.

The committee would have the same conversation about the head-to-head result, but both teams could be looking up at Alabama, Georgia, Cincinnati and Notre Dame — or the Big 12 champion.

What needs to happen for Notre Dame to reach a semifinal?

The ideal scenario would be for Cincinnati to lose to Houston in the American Athletic Conference championship game, and there’s more chaos in the Power 5 title games.

Considering Ohio State, Michigan State and Michigan all still face each other, it’s realistic to think Notre Dame will eventually jump at least two of them, assuming it finishes 11-1. That’s not enough, though. The Irish need more help than Cincinnati — because they lost to the Bearcats. If Cincinnati loses in the AAC championship game, it would have a similar record to Notre Dame and neither would have a conference title. Would the committee still honor the head-to-head result?

Selection committee chair Gary Barta on Tuesday said the group hasn’t even discussed not honoring it to this point.

“I’m just saying, in the areas in which we’re having these conversations, looking at Ohio State and Michigan, Cincinnati sandwiched in between those two right now, there has not yet been any conversation of having Notre Dame ahead of Cincinnati,” he said, “but again, next week will be a new week and we’ll evaluate who each of them play and go from there.”

Notre Dame doesn’t have anything left on its schedule to impress the committee, so the group simply would have to think the Irish are better based on what they see in those games against Georgia Tech and Stanford, opponents that are a combined 6-13.

Most of all, Notre Dame needs to look like a top-four team in its final two games.

When asked on Tuesday night what he could share about the committee’s discussions around Notre Dame, Barta credited the Irish’s schedule for the second straight week.

“Well, they have great wins — they won again this week at Virginia,” Barta said. “One of the things the committee did note is that Virginia did not have their starting quarterback, but they’re 9-1, they have really — they have a very strong strength of schedule. They have wins against Wisconsin and Purdue. Their loss, obviously, was to Cincinnati. We think very highly of them. They continue to play good football.”

Based on tonight’s ranking, it’s No. 9 Oklahoma State. The selection committee has been impressed with the Cowboys’ defense, which is No. 3 in the country in defensive efficiency and has helped compensate for an average offense.

The Cowboys are No. 6 in ESPN’s Strength of Record metric, and have the 10th most difficult remaining schedule. While they have a loss to unranked Iowa State, it helps the Cowboys that they beat No. 11 Baylor, and No. 13 Oklahoma is still a top-15 CFP team that could continue to boost their résumé.

Oklahoma State is at Texas Tech on Saturday before facing Oklahoma at home in the regular-season finale on Nov. 27. ESPN’s Football Power Index gives the Cowboys a 53.9% chance to win Bedlam. Oklahoma State can clinch a spot in the Big 12 title game Saturday with a win at Texas Tech and either an Oklahoma win OR a Baylor loss. Oklahoma can clinch a spot in the Big 12 championship with a win against Iowa State and a Baylor loss at Kansas State.

There’s also still a possibility that two-loss Baylor earns a spot in the Big 12 championship. If Oklahoma loses either of its next two games, Baylor would win the tiebreaker with its head-to-head result. While it would be great for the Bears, it would be devastating for the Big 12’s playoff hopes to have a two-loss champion.

ESPN’s FPI gives Baylor a 45% chance to make it to the conference championship, trailing Oklahoma State (88%) and Oklahoma (65%).

How does Cincinnati finish in the top four? And who could leapfrog the Bearcats?

If Oregon loses at Utah on Saturday, the Bearcats should make history in one week when they become the first Group of 5 team to crack the CFP top four in the fourth ranking of the season. To stay there, they likely would need to finish as undefeated AAC champs.

If they lose, all bets are off.

It would further legitimize the possibility of Alabama and Georgia claiming the top two spots, regardless of what happens in the SEC championship game. It would open the debate with Notre Dame. It would also give the Big 12 champion some hope. As long as the Bearcats continue to win, though, these rankings indicate it would only take one more upset above them to make history.

What happens if Bama loses a close game to Georgia?

It would probably have to be a close game, though — unless there is chaos elsewhere. For a team to finish in the top four without winning a conference title, the group would have to consider it “unequivocally” one of the four best teams. Would a two-loss Alabama that didn’t win its league still usurp a one-loss Big 12 champion? (Based on what we’ve seen to this point? Probably).

Alabama continues to be helped by the number of SEC teams ranked in the CFP Top 25, as it has wins against No. 12 Ole Miss and now No. 25 Mississippi State.

Alabama’s grip on No. 2, though, might not be as solid as it appears.

“I can tell you that 2, 3 and 4 was an area where the conversation was a little bit longer,” Barta said. “I mentioned earlier, we didn’t learn a lot about Alabama this week but continue to be impressed with the way they play on both sides of the ball, but there was good conversation about where Alabama, Oregon and Ohio State should be placed.”

Parking lots are becoming as important as cars in climate change efforts
What’s the status of California’s upcoming $10M electric bike rebate program?
Rolls-Royce uses hydrogen produced with wind and tidal power to test jet engine
Rivian (RIVN) will use wind energy to power up to 75% of its Illinois factory
This guy built a six-seater electric bike for $150, and it absolutely rips