Driving through the Bialowieza forest – next to Poland’s border with Belarus – a green light shines out from the porch of a house.

The bulb throwing off a luminous hue into the darkness around.

Pulling up to look, the owner comes out to talk. The green light is part of local movement offering help to migrants and asylum seekers hiding out in the woods once they’ve crossed into Poland.

The woman, who only wants to be known as Monika, says: “I put the green light on because my home, our home, is refugee-friendly.

“It means that everyone in need may knock on our door and help will be provided – with hot tea, a warm meal, a change of clothes – and we will call medical help if anyone is in such a need.”

Other homes in what is Europe’s oldest forest also have green lights outside.

Some of the locals, gathering wood or mushrooms, have come across migrants trying to survive out in the open, and decided to help. The offer of bath and the chance to charge a phone always gratefully received.

The grassroots movement around the forest is growing, especially in an area closest to the border where formal aid agencies and journalists are forbidden to go.

Underground networks of local people have developed. As some invite migrants into their homes, others go out to deliver vital supplies like food, drinking water, sleeping bags, nappies and warm clothes for children.

Oliwia, she doesn’t want to give her full name, co-ordinates the goods heading to the forest.

They need to be hidden in different locations to avoid alerting the authorities. She says the forest is a beautiful place, but is cross-crossed by swamps and rivers. Living in the open out there is tough, especially in the harsh temperatures of a Polish winter.

She describes a recent event when volunteers were called out to an Iraqi family in the woods. They found a father with three children. The youngest was just three.

Oliwia says: “They were all wet because they trying to cross through some of the swamps.

“And the youngest of the children had heavy diarrhoea and vomiting because they were drinking water from the puddles and the swamp.

“And the baby was literally covered in excrement because obviously the father couldn’t clean him.

“They didn’t have any other clothes and undressing him would mean leaving a baby naked in this, in these weather conditions.”

The volunteers washed the children and put them into clean warm clothes. Basic medicine was provided, but the father refused to see a doctor for fear of being sent back to Belarus.

Oliwia says even the children were terrified. 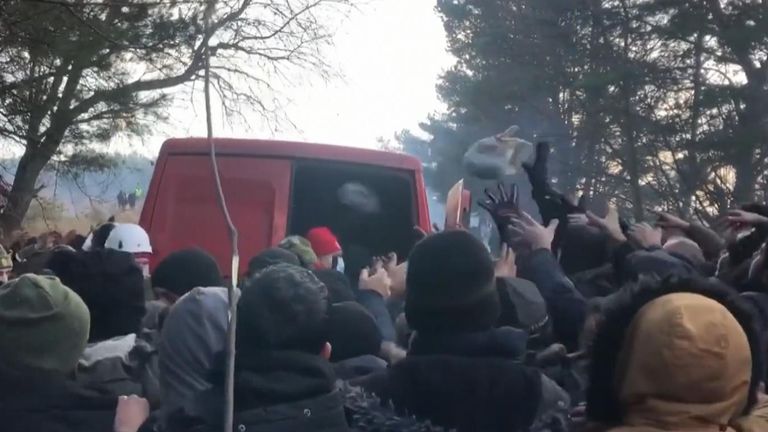 “They were too scared to make themselves known to the authorities because the risk of being pushed back outweighs the need to seek medical help.”

Oliwia says there is only so much they can do within the law.

If people want to seek asylum they can put them in touch with lawyers. They offer help on the ground but have to leave people in the forest.

And that haunts Adam, who also wants us to protect his identity. He is working man, a father, who goes into the forest to help as often as he can. He says: “I think quite often about those people that were asking me for help and I was not able to help them.

“Yes, I still keep thinking about those guys and of course I don’t know where they are and if they are OK.”

Adam is critical of the Polish government, saying it shouldn’t be left to local people to meet what are basic humanitarian needs.

He says: “I think that much more could be done in this situation for sure.

“Now we are left more or less alone with this problem. I mean, we as a citizens or people that live here in this closed zone.

“It shouldn’t be like that. So I think that in a sense for sure, the government has failed.”

And he and other residents fear it will be a long time before their work is over.

Thousands are still waiting on the Belarusian side of the border wanting to get to Poland.

Suspect in Salman Rushdie attack charged with attempted second degree murder
Digital Tool Shown to Be Effective in Helping People Reduce Alcohol Intake on Their Own: Details
For good, or ill, the Republican Party has placed itself in the orbit of Donald J Trump – Adam Boulton analysis
Wallabies injury curse strikes again, Fainga’a out
Potential curb on Australian LNG exports is another blow to Asia-Pacific gas markets